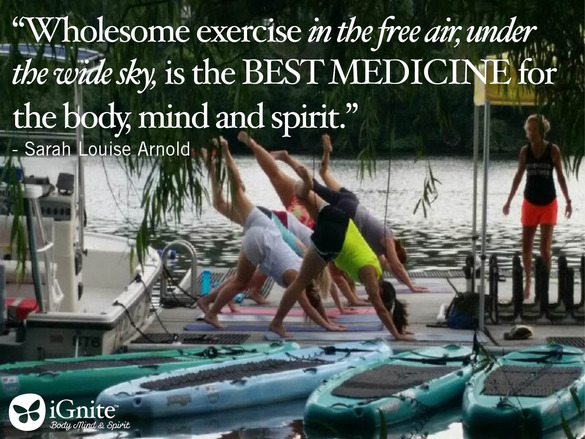 Point to Ponder:
Are you spending enough time exercising outdoors?

Yes…it is HOT outside, at least before this amazing cool and wet front blew in! WHEW! Despite the actual temperature, it is always a great idea to exercise outdoors. I don’t only think this because I prefer outdoor exercise and it is iGnite’s philosophy, but if you happen to be a someone who needs actual evidence, I have listed below the proven benefits of exercising in nature, which are all undeniably awesome!

What I am definitely not recommending is exercising outdoors in the heat of the day. We should all consider the intense heat and it’s dangerous effects. However, rising early to beat the heat while also focusing on proper hydration makes for the absolute best opportunity to enjoy the amazing benefits of exercise under the blue sky and amongst the trees and birds. There’s nothing better for your body, mind and spirit!

Action Item:
Rise early to beat the heat, and stay proper hydrated so you can experience the amazing benefits of exercise in nature.

6 thoughts on “The Proven Benefits of Outdoor Exercise”