First of all, let me begin by saying that this is my 4th or 5th time rebooting. I know this because I found that many booklets when I was looking for a particular recipe. Each time I do this it’s easier because I’ve carried over so many of the habits. Except for one. For the love of Epsom salts, I CANNOT remember to use the body brush – I have done it exactly ONE time during all t

hese reboots. I have it conveniently perched on the bathtub right next to the shower to remind me, but inevitably, it’s not until I’m in the shower reaching for the brush I keep there that…DOH!
I have yet to shower today, so there’s hope.
I will set an intention.

So I got to sleep in this morning because it was a late start school day for my kids – up at a luxurious 8:00. That made for 8 hours and 29 minutes according to the fitbit I got for Christmas. I had already negotiated with my husband to take kids to school, but somehow still managed to be late to yoga. I think it was making kid lunches first. Part of said negotiations. I digress.

I had my lemon water and then got three figgy pops. I found these last week at Costco and I love them as an easy and very yummy grab and go item.
Perfect for the drive to the Treehouse. By the way, if you have not been to yoga at the Treehouse and can possibly make yourself available between 8:30 and 9:30 on Fridays, do yourself a favor and go! Amy has magic powers to intuitively know what her class needs and after Thursday kickboxing; focusing on stretching and relaxing is just what I needed. I was so relaxed I forgot to take pictures, but trust me – it’s lovely. 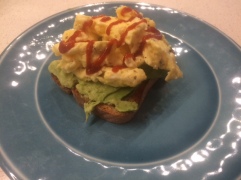 Got home in time to take my oldest to middle school and then made my favorite breakfast/lunch/dinner/snack – Udi’s whole wheat, 1/4 smushed avocado topped with a scrambled egg and sriracha. Yum! And settled down to work.

Had a late-ish lunch while finishing work – tuna and avocado on Udi’s bread with a side of apple slices and some exotic root chips. I’ve found that I typically don’t have time for a “breakfast” while I’m getting kids up and out the door and myself to a class. So it’s usually a couple of pieces of turkey bacon and some apples spread with nuttzo (another Costco find that I adore) or a hard boiled egg and some fruit. When I get home from working out is when I have my heartier breakfast, then a later lunch, an afternoon snack and then dinner. Yep. Anyhoo, back to my day.

I had a shower! And just as I was about to step in – I saw the body brush! Yay intentions! So check that reboot box and let’s hope I remember again now that I’ve done it once. Don’t have strong feelings one way or the other about the body brushing. I guess I need to do it more than once. 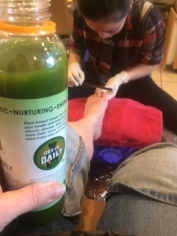 After picking up two kids and dropping off one, I went to meet my oldest for a pedicure at the delightful salon she can walk to from the middle school. Spontaneous-as-of-this-morning focus on me time. And I got a little green juice in for good measure.

The rest of the day was spent driving small people hither and yon with a stop at the grocery store for dinner – Organic salmon, green beans and wild rice. As the sun set, my husband did tempt me with a glass of bourbon, but I stayed strong and had some tea while getting in an Epsom salt bath. Not a bad ending to day 5 at all.