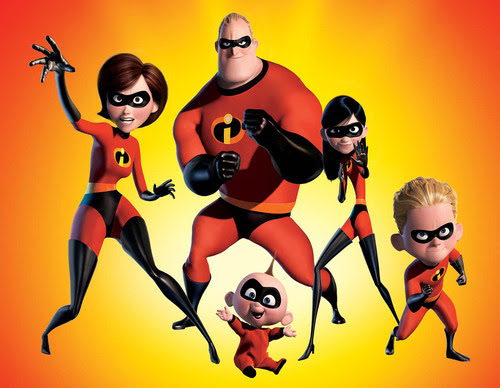 “We are products of our past, but we don’t have to be prisoners of it.”
-Rick Warren

Point to Ponder:
Have you become numb or blind to what’s around you, preventing you from enjoying the greatest adventure of your life?

Action Item:
Create a list of all things in your life that you find yourself wishing you still had. Then, be creative and reinvent that part of your life so it fits your current life.

If you’ve never seen the movie The Incredibles  I highly recommend it!  I would not have suggested it ten days ago, as it simply served as a source of visual stimulation and superhero fun for my son Durant while I scurried around the house. As I’ve watched from a distance, it appears to be your everyday superhero kid flick, but this 2004 Disney Pixar movie is exploding with relative adult issues and messaging, including marital stress. It’s a doozy! Most recently, however, when paying close attention, there were two scenes and a few lines that blew my mind, in a good way. Here is a quick summary:

Pre-marriage, Bob Parr, a.k.a., “Mr. Incredible,” (the large man in the picture) and Helen, a.k.a., “Elastigirl,” (the woman in the picture) were crime-fighting, life-saving, and evil-slaying superheroes. Unfortunately their government and public support came to an abrupt stop when Mr. Incredible was sued for saving a man who didn’t want to be saved. Fifteen years later and married with three children (also born with superhero powers), they are forced to live the “civilian life.” They live in the suburbs and consequently have retired their superhero status. They are living the “normal life.”

As you might expect, Helen is focused on raising their children and is not bothered by “the retired life.” Bob, on the other hand, is obsessed with his glory days. Being a superhero is his passion and identity, and without it he is unfulfilled and miserable. He’s lethargic, semi checked-out and is not an active or involved husband or father. Because he loves being a superhero, at night he secretly leaves the house to fight crime and save lives. One night while entering the house late Bob was caught red-handed. He and Helen had this rich exchange:

Helen: “Is this rubble?” (she spots something on his jacket)
Bob: “It was just a little workout, to stay loose.” (workout meaning his superhero outing)
Helen: “You know how I feel about that Bob! Darn you! We can’t blow cover again!”
Bob: “The building was coming down anyway.”
Helen: “What?! You knocked down a building!”
Bob: “It was structurally unsound. It was coming down anyway.”
Helen: “Tell me you haven’t been listening to the police scanner again?”
Bob: “Look, I performed a public service. You act like that’s a bad thing!”
Helen: “It is a bad thing Bob! Uprooting our family again so you can re-live the glory days is a very. bad. thing!”
Bob: “Reliving the glory days is better than acting like they didn’t happen!”
Helen: “Yes, they happened, but this, our family is what’s happening NOW Bob, and YOU ARE MISSING THIS!”

Ho-ly cow. That last line is huge! Trust me, I’m not railing on men or fathers, as I think living in our past and trying to re-live our past, like wishing we looked how we once looked or wishing we could do what we once did is like trying to fit a square peg in a round hole. It’s impossible! This is a universal issue that absolutely keeps us in regret and denial and out of joy. It prevents us from recognizing our present blessings, gifts and potential and enjoying our current life.

To fast-forward, without knowing he is actually being set up by the villain “Syndrome,” Bob secretly takes an undercover superhero job. Helen finds out and recognizes that just because she’s retired from superhero life doesn’t mean she can ignore her special powers, especially in times of crisis. So she and her two oldest children set out to rescue Bob. After coming together as a team but being captured by “Syndrome,” Bob realizes he’s been missing out on his family and says this to them:

“I’m sorry. This is my fault. I’ve been a lousy father – blind to what I have.
So obsessed with being undervalued that I undervalued all of you.
So caught up in the past.
YOU are my greatest adventure and I almost missed it.”

In conclusion, the whole family learned valuable lessons from one another and of course lived happily every after, however the adult message I felt was so inspiring, brilliant and wise is this: just because we are in different season of our life doesn’t mean we have to quit or ignore our passions or gifts from our “glory days”. And, quitting or suppressing the things that fulfill us creates an existence status, which prevents us from realizing the abundant life that is laid out for us. We can have it all, and we can experience our glory days, we simply have to re-invent them, and that’s the exciting part- the opportunity- THE ADVENTURE!

2 thoughts on “Trying to Re-live Your Glory Days”