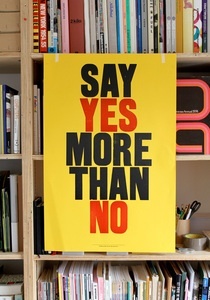 “The big question is whether you are going to be able to say a hearty yes to your adventure.”  – Joseph Campbell

Say YES whenever you can. But when you can’t, don’t settle for a “no” — instead, suggest an alternative that you can say YES to!

Have you ever thought about the power of the words “yes” and “no?” I never had until I co-owned a non-competitive gymnastics business several years ago. Our gymnasts ranged from toddlers to preteens, and after every class we wanted each of them to leave with a positive experience and increased self-esteem. We wanted them to run out to their parents telling them how much fun they had and how great they had done, even if the only skill they performed was to “hop like a bunny” or to kick a coach in the face while doing a cartwheel — which happened a lot.

We also noticed in our parent/tot classes that the toddlers that were told “no” more often than “yes” by mom or dad were the ones who rebelled and misbehaved more often. On the other hand, the children that were corrected in a positive way, without being told “no” had an optimal experience, with both parent and tot leaving bonded and excited, rather than irritated and defeated.

Regardless of the age or skill level of each gymnast, when a skill was performed incorrectly or the coaches caught a foot in the face, we trained ourselves to smile and say “YES, great job! Now lets try it this way…” This response always increased the child’s confidence, and their progression rate would soar. It also made our coaching experience—an adventure, really—exceptional and joyful. We left feeling just as excited and eager to come back as the children did.

I learned so much about life and relationships during that time. The children transformed my mind and spirit in monumental ways. Saying “yes” to the children—and jumping on trampolines and doing donkey kicks while yelling “hee-haw”— changed me. I saw the children as blissfully unaware of the problems of adulthood, so purely passionate for activity, new experiences, and adventure. They motivated me to be more like them: enthusiastic about life. The more I embraced their spirit, the harder I laughed, the more fun I had at work, and the more rich my life became.

This week, I encourage you to practice saying “YES” to your children, spouse, significant other, friends, etc. and to consider carefully the times you say “no.” When you do have to say “no” to a request, I urge you to follow it with an enthusiastic alternative—something you can smile about, something you can say “YES” to. I have no doubt this will take you on a wonderful adventure, and leave you and those around you more satisfied and exhilarated.

4 thoughts on “What a Toddlers Gymnastics Class Taught Me about the Confidence-Boosting Power of ‘YES!’”